We are officially in the second week of our summer routine and the girls have been ready for Tuesday. They figured out what they wanted to make and had me buy the missing supplies over the weekend. While buying some of the supplies Big suggested a different name for Tuesdays so they are now called “Tinkering Tuesdays”…as she stated it keeps with the idea of the them aligning with the day. Today we made…

Yep we did it we tried to make our own bouncy balls…it is not like we don’t already have various bouncy balls floating around the house, car, and every now and then my bags 🙂  There are tons of places to find out how to make them but we used the instructions from the Chemistry for Kids About Education section. 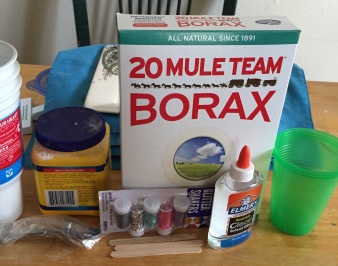 We only had to buy the borax for I hadn’t needed to use some in my laundry lately.  The girls wanted to put glitter in their balls to add to their  ball with confetti.

Basically you have two sets of cups per person for a two steps of mixing ingredients.  In one cup you mix 2 TBS of warm water with 1/2 TSP of borax.  Stir and wait.  If you plan on adding food coloring due it in this cup, but note that no food coloring makes the balls white.

In the second cup you put 1 TBS of glue, 1 TBS of cornstarch, and 1/2 TSP of your borax mixture (from cup one).  Now you do not initially stir but wait for 15 seconds to let the chemicals do their magic.  My girls were like we do not see anything happening — not sure if they expected smoke or something but they wanted to stir rather than wait :).  Once you have waited you can stir in the cup until it becomes hard to stir…you will then put the mixture in your hands to start kneading to form a ball.  Until the ball is not sticky you have to wait to try bouncing…. Thankfully I had to go tutor so our balls got to sit for about 2 hours.

Since we had some of the borax solution leftover the girls asked to make another ball that was bigger…So I did my math magic to figure out the correct ingredient amounts and let them go crazy with food coloring and glitter….BIG mistake 🙂  As you can see Big’s hands are green for she decided to pour tons of food coloring rather than a dash.

When we got home we tried bouncing our balls and they had half the bounce of a store bought ball.  We also noticed that the balls true to the recipe were better than the experiment balls.  Even though we put glitter in the mixture you could not see the glitter which I think is because of the glue.  I also read that the more water you add the more translucent the balls will be…YES my girls have already asked to try it again for they want the glitter.  Sidenote —  the balls will flatten as you let them sit.  Just roll them up when ready to use.