Did quite a bit of cooking this week — my one night class is in the “online phase” till April.. we tried some new recipes and then some repeats… 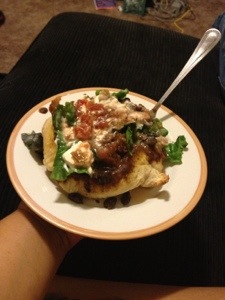 Taco Pot Pie – We typically eat tacos every week so I’m really trying to try new “Mexican” style dishes to add variety.  I saw this on Plain Chicken and had to try it — well mine looks nothing like hers for I didn’t pull the dough up far enough… but it still tasted good.. My youngest had only cheese will me and the oldest had black beans with taco seasoning.  Definitely something I will try again and pay attention to how I pull up the dough.

Baked Veggie Egg Rolls – We also seem to like “Asian” style food which gets expensive going to a buffet since I like variety.  I knew how to make veggie lo main and fried rice so wanted to try my own version of egg rolls.  I got the wrappers from a local Asian market and just put savoy cabbage and carrots inside…this recipe was my guidance.  Hmmm they tasted okay but nothing like what I get at a restaurant… I will definitely make again but going to try different vegetables and figure out way to make crispier. 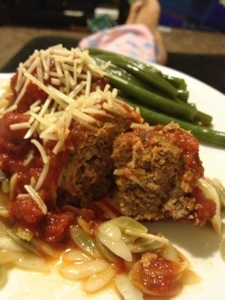 Greek Pasta with Meatballs – This was valentine’s dinner with a side of green beans.  I seen the recipe in the Cooking Light Ultimate Kid-Approved Cookbook and wanted to try it… lamb meatballs rather than turkey.  My oldest didn’t like them but my youngest did… not sure if I will make it again but I can at least say I tried.  I didn’t put crumbled feta cheese like the recipe for I knew they wouldn’t like it so I used shredded parmesan instead.

I can honestly say I haven’t planned our menu for this coming week but plan on doing so later tonight.. What have you been cooking?

I personally wanted to kickoff Black History Month highlighting some of the Black environmental + outdoor organizations/groups I follow on the Gram!
Get Sustainable With Me
Over our holiday vacation I got to visit the @louisvilletoollibrary and what a treat!
I wish refill-focused stores were easily accessible unfortunately they aren’t.
I’ve been wanting to making these cleaning wipes since Fall 2022 when my oldest drastically ripped her swim shorts. My hope is that I can use these wipes in the bathroom to wipe down each night….if it works then I’ll make another container for my kitchen.
What’s Happening In Sustainability