It’s been snowing here in Lexington – LOVE IT!  Although I’m a fan of warm beach-like weather.. every now and then I just want to play in the snow.  The girls have spent the morning playing and are now warming up to a good cup of apple cider(instant)…

Unfortunately, I didn’t get to post a “What’s cooking” last weekend but trust me I will remake the meals again for the girls seemed to like them.  This week I fixed

1.  Broccoli & Cheese Stuffed Potatoes – I’ve made this side item before but it had fattening ranch dressing in the mix.  I saw a different recipe using sour cream in my Cooking Light The Ultimate Kid-ApprovedCookbook.  I only mixed butter, broccoli, and sour cream with the potato and it still tasted good (I waited and put the cheese on top).  Little K was her typical picky eater and barely ate any of it BUT Big K loved it.  I served it with lemon chicken for the girls so I can see trying it again with some baked fish.

2. Open Faced Tacos – YUM these were good and a different way to eat a taco – thanks Plain Chicken for the idea.  So took my normal black beans, put on a tortilla, topped with some mexican cheese, and baked.  Once the tortillas were a little crispy topped with some lettuce/tomatoes/salsa/sour cream.  The girls LOVED them but I had to cut the tortilla so they could eat  — they wanted to fold it 🙂 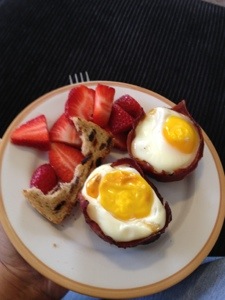 3. Twist on Bacon & Egg Muffin Cups – In the summer I tried to make a breakfast muffin that I had seen in a magazine that used cornmeal… it was a failure.. SO thought I would try a different one which was an ultimate SUCCESS!  I found various recipes but then saw one from The Daily Dish Recipes.  I made some variations to the recipe – used turkey bacon, cinnamon raisin bread, and for the girls only egg whites (I don’t understand how they aren’t fans of the yolk).  I just want to say the muffins were freaking good – this was a moment that I wished for a 12 cup muffin pan so that we had more than two person.. but that might of been too many eggs for us:)  You can best believe I will be making this again with some variations like regular bread or mixing the eggs first.

This coming week I’m going to try a bean taco dip for super bowl sunday and pushed the alfredo to this week since didn’t get to make it.  I might try a new breakfast meal OR use one we’ve done before since the valentine party is next weekend.

So what are you cooking?

Get Sustainable With Me
Over our holiday vacation I got to visit the @louisvilletoollibrary and what a treat!
I wish refill-focused stores were easily accessible unfortunately they aren’t.
I’ve been wanting to making these cleaning wipes since Fall 2022 when my oldest drastically ripped her swim shorts. My hope is that I can use these wipes in the bathroom to wipe down each night….if it works then I’ll make another container for my kitchen.
What’s Happening In Sustainability
It’s the third week of a new year and felt it was necessary to remind folks that everyone’s sustainable journey is not the same…so please don’t compare and/or judge💜